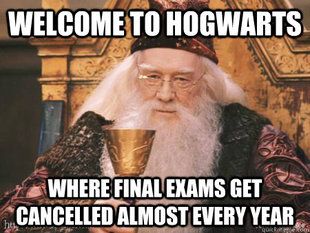 Today marked the final day of classes and papers due! Now if only final exams were cancelled too… but alas starting next week we have three weeks (one final a week) of exams!! If only we were at Hogwarts…well at least not in Harry’s first year…

Because picking up where we left off Harry, Hermione and Ron are taking final exams! As they stress through exams and studying and more exams, the thought of the sorcerer’s stone still lingers in their minds. The Golden Trio works to figure out the missing pieces. Once they find out that Snape (who they think is the person trying to steal the stone) knows how to get past Fluffy, they try to tell Dumbledore. Unable to get to him, they rush off to try and keep Snape from the stone.  They end up having to solve logic puzzles and other various tests used to defend the stone. Ron uses his chess skills, Harry uses his quidditch skills and Hermione uses her logic powers to get Harry into the room where the stone is hidden. Each one of them uses their own skills to pass the tests made by their very own professors.

All this talk about tests and exams brings us to this week’s theme (which seems redundant by now): tests. 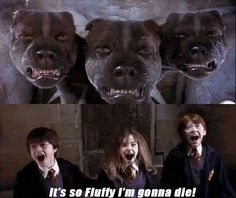 This semester has been full of tests… while not physical exams for most of us, we were tested in a variety of ways.  We had personal tests: making new friends, learning new places, figuring out how to balance school, the bar and life, and figuring out how much fun we could have. We had scholarly tests: creating new study habits, figuring out how many things to write down that each teacher said, learning how to brief cases, and write legal memos or letters. We had social tests: learning what professional wear meant, how to act professionally and how to network. There were so many new things to learn and we aren’t done yet.

But reflecting on everything we’ve learned I think that the one thing I’ve learned the most is that I have a lot growing left to do emotionally, mentally, professionally and socially. How so?? Check out the next chapter’s (the last chapter of the book) blog.