The past month has been one hell of a ride between an internship, my part-time job, a 5,000 word essay, a 10-pg essay, a 1,000 word essay final, a 1500 word final and numerous mini-assignments for my summer seminar class. But, now that they are all either done or wrapping up I have ALLLLLLLL the time to write Harry Potter blogs again. It’s perfect timing with Harry’s Bday coming up next week!

Today we are combining two chapters and looking at how we can be blinded by our negative emotions AND how we can unblind ourselves by getting our own “patronus.”

So let’s start with a quick recap of the two chapters and then dive on in!

The Firebolt starts with Harry storming back through the secret passage ways to Hogwarts from Hogsmeade after finding out the Sirius Black was the reason his parent were dead. He then has a horrible dream about the whole thing. The trio goes to visit Hagrid who tells them all about dementors and his time at Azkaban. Christmas comes and harry’s got an anonymous gift under the tree which turns out to be a Firebolt, the fastest new Quidditch broom there is out there! Hermione tells the professor’s who then take the broom because they are worried its hexed or jinxed and they wanna run tests on it before Harry can use it. Harry and Ron get mad at hermione. The Patronus chapter begins with everyone still mad at hermione as the holidays wrap up. Oliver Wood hears about the Firebolt and tells Harry that Harry needs to get his reaction to dementors under control before they lose the Quidditch cup this year. Harry starts his demeanor fighting lessons with Lupin where Harry starts to work on conjuring a patronus charm. After a few tries harry manages to conjure a weak charm and Lupin and Harry talk about Harry’s parents. Harry learns more about dementors, gets his Firebolt back and everyone makes up with Hermione until Ron finds blood and Hermione’s cat’s hair on his bed, but not his pet rat.

What’s funny about this post that I am writing at work today is that I could really use a patronus charm right about now. Social Media is overflowing with posts about how sad people are to at their last day of their internship, or how happy they are to have made all these new friends this summer. I’m extremely happy for them, but at the same time I’m trying to fight of the negative feelings I am starting to drown in. My summer internship has been one of extreme loneliness. I’m the only intern in my department (well for the most part, someone just started but only works Fridays) and most days I sit alone at a cubicle waiting for the time to pass because there’s not a flux of information requests coming in. I’m very lucky to have this internship and have learned a lot, but its extremely lonely at times, and not something I enjoy immensely.

It’s hard to not get stuck in negative feelings. Looking at these two chapters there are negative feelings everywhere. Harry has anger and hatred towards Sirius Black that causes him to lash out at friends or isolate himself. Hermione is stressed with class work and isolates herself from others (but also is isolated because Harry and Ron are mad at her for her worrying over Harry’s safety with the Firebolt broom). Ron is consumed with jealousy towards Harry and uses snippy remarks in celebrating Harry’s new broom. Wood is consumed by a desire to win and even admits to Professor McGonagall that he doesn’t care if Harry falls off his broom again so long as he catches the snitch first. And lastly Lupin is stuck in a nostalgic rut failing to see the hurt Harry is going through as they discuss Harry’s parents at length.

Negative feelings tend to blind us. These feelings cause us to only see our hurts or hang-ups and not be able to view the world clearly. For me, negative feelings tend to rule my life. I tend to dwell on the things that aren’t going right, the things that feel strained or hurtful in my life and I act out of those emotions instead of the numerous positive ones that surround me daily.  But then Lupin described a patronus and it made me start to think that there’s something to truly having a positive mindset.

The Patronus is a kind of positive force, a projection of the very things that the demeanor feeds upon- hope, happiness, the desire to survive- but it cannot feel despair, as real humans can, so the dementors can’t hurt it.

Dementors are commonly compared to depression, that very deep despair people can feel until they feel nothing anymore. And sometimes a positive mindset doesn’t help in the deepest of depressions and you should seek professional help when depression sets in that deep.

But when it comes to warding off negative feelings and thoughts I think being able to conjure up your own patronus of sorts is an important thing to do and it takes dwelling on positive memories, ones that aren’t tainted with a hint of despair, but feel us with hope, happiness and the desire to survive. So here’s my little outline for conjuring your own patronus:

It’s not a fool proof method, it’s truly one that you have to work on, just like Harry. Even Lupin says qualified wizards have trouble with the Patronus Charm, but it doesn’t mean you can’t try to make the most of every moment, every time.  Hope, happiness, and the desire to survive are the quintessential parts of getting through anything hard, including a job that turns out not to be what you thought it would be, law school and tough patches in life.

But as long as you remember there are so many beautiful parts of life to counter those negative, hard parts you’ll make it through. I believe in you. And for me, today I am focusing on using humor as a means of curing my loneliness, because all the time I have spent laughing with good friends makes me have hope that I can get through anything.

P.S. log onto pottermore.com and see what your patronus is! Here’s mine: 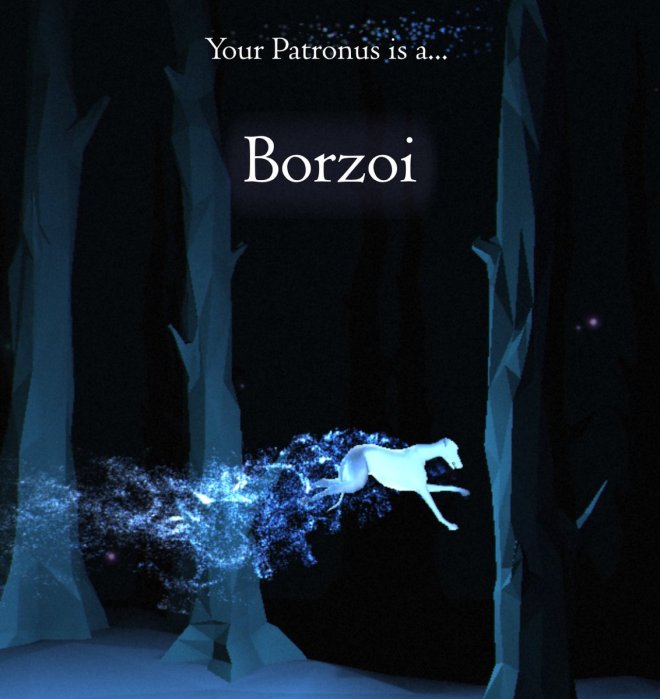 That those who take the form of dogs tend to be friendly and loyal is no secret. The borzoi dog usually marks someone who is also easy-going, often quiet, and possessed of a good sense of humor. They have active, intelligent minds and are experts at amusing themselves, being content alone or with others. Rare is the borzoi that can manage to keep themselves bored for long. The tendency to find humor in almost anything is also common in borzois, from the mundane to the macabre. Though, naturally, the range depends on the individual. The humor comes with a helping of class and, when applied properly, they are quite eloquent people that can navigate difficulties in life with easy grace.