If there ever were two chapters of Harry Potter to describe law school, these would be those chapters.

In these two chapters, Harry and Ron follow the spiders into the Forbidden Forest. There they meet a GIANT spider named Aragon. Aragon tells the story of how Hagrid brought him to the school and cared for him until Tom Riddle turned Hagrid in (the last time the Chamber of Secrets was opened) and Aragon went to live in the Forbidden Forest. After Ron and Harry learn that Hagrid is innocent, they attempt to leave the spiders’ nest only to attacked by all of Aragon’s sons and Daughters. They only manage to escape because the Weasley family car, now wild, emerges from dark and races Harry and Ron out of the forest.
In the next chapter, McGongall announces that the mandrakes have matured enough to turn them into a potion and wake up everyone who has been petrified. The teachers are ecstatic thinking that the nightmare will be over and one of those petrified will tell them who is causing all of their troubles. Harry and Ron visit hermione in the hospital wing, where they find a crumbled up paper dealing basilisks in her hand. After talking to Moaning Myrtle (the first student killed by the basilisk) they start to piece the puzzle together.

Things turn for the worse though and the school is in a panic going into finals, and it’s not because finals, but because a student has been taken into the Chamber of Secrets. Harry and Ron spy to overhear that Ginny is the student now in the Chamber, and that Lockhart has been chosen (mainly through his bragging) to go and rescue her. They run up to Lockhart’s office to warn him about what he faces in the Chamber, only to find Lockhart packing his bags to flee. Lockhart discloses that he is a fraud. Harry and Ron force him to go into the Chamber of Secrets only to find themselves soon separated, Harry continuing alone and Ron staying with a memory hoped Lockhart.

This week’s theme: help. Harry and Ron find many people and things that help them in their worst moments, and in law school it’s important to also find things to help you!

The first year of law school is winding down with less than 7 weeks to go, and the closer we get to finals, appellate briefs being due and oral arguments, the more it feels like walking into a giant spider’s nest. Tensions are high around every corner and relief feels no where in sight. We also have that extra stress of figuring out classes for next semester and interviewing for summer jobs. 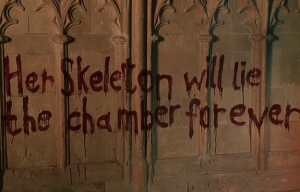 It definitely feels a little overwhelming. Finals looming over us, and everything still left to do feels a little like jumping down the secret passage to the Chamber of Secrets. But amongst all of this there are so many trusty sidekicks alongside us as we go through this journey. I started this semester by starting therapy at the Health and Counseling center on campus. It’s always a vulnerable moment to admit you have some issues you want to talk out, or that you need some help. I’ve posted on here before that I have General Anxiety Disorder. It’s not an easy disorder to detect since its all internal but it does manifest itself in different ways. For me, I plan because then I have a semblance of control over the situation. I also rehearse every conversation or answer numerous times before raising my hand or approaching someone. There are so many calculated moves because of my anxiety. Asking for help isn’t an easy thing to do either because of the implications behind it.

Most days in law school I feel like a fraud. Not to the extent of Gildeory Lockhart, but pretty close. it’s just part of law school, or at least that’s what they tell us. When you go to school with engineers, mock trial award winners, debate champs, military veterans and so many other people who have very different backgrounds, it’s hard to keep your head up and feel like you should be there. At the end of the first semester I felt a little lost, a little deflated, a little tired and very stressed. The adrenaline was wearing off and I wasn’t sure if I could continue… but then I asked for help. over the past few months it’s been amazing to talk to someone who really reminds me of why I’m in law school. She’s like having a Hermione to help guide you through the obvious things in front of you! I may not be some amazing award winning, always been on the tract to be a lawyer, beautiful minded law student, but I am a very accomplished person. I’ve started and ran my own business, I’ve managed a multi-million dollar store, I’m a published author and so much more.

It’s easy to get lost when you are faced up against some seriously stressful situations, but when you let others help you, when you allow the car to drive on it’s own and you start to trust yourself, law school becomes a bit easier to manage.

DON’T BE AFRAID TO ASK FOR HELP!