Hey all you Wizards and Muggles! It’s Sunday which means it’s my new favorite day of the week, thanks to this blog! Today is a very special day for two reasons! The first… you are going to get this post and then later today… you’ll get a second chapter (thank you labor day weekend for the extra time!). The other reason is because the chapter we are covering today is where one of my favorite HP memes comes from!! And because we post on Sundays, this meme is near and dear to my heart: 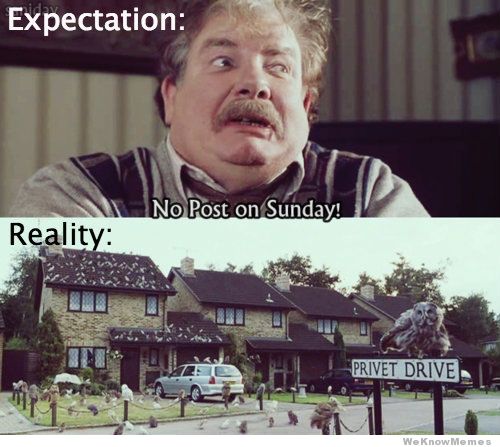 That’s right, this week’s chapter The Letters From No One is where mysterious envelopes start showing up at number 4 Privet Drive with Harry Potter’s name on them. We start the chapter with Harry and Dudley living out the remaining days of summer. Harry is still pretty much in trouble for the happenings of the last chapter, and Dudley is giving him hell with this new favorite sport: “Harry Hunting”. As school approaches we see the vast difference in how the boys are viewed once more: Dudley is heading off to a fancy private school with beautiful uniforms while Aunt Petunia is dying a whole bunch of over-sized clothes grey for Harry’s school year (is he going to jail for school?). Fast forward to breakfast one morning, the post arrives and what do we find? The first letter to Harry. Now this sends panic into the Dursley parents who like we’ve said before, know Harry is a wizard.

Aunt Petunia looks it curiously and read the first line. For a moment it looked as though she might faint. She clutched her throat and made a choking noise.

They panic thinking they are being watched and will be punished for keeping Harry in the cupboard, so they move him upstairs to Dudley’s toy room. They don’t let Harry read the letter and throughout the rest of the chapter they go through great lengths to keep Harry from receiving the letters that just don’t seem to stop coming (if you’ve seen the movie you know what I’m talking about). Vernon decides to hit the road, and when the letters are then still being delivered by the hundreds to their hotel room, he decides to hide the family in a shanty on a scary island out in the middle of the sea.

So what theme do we pick out of this chapter? That’s simple: you can’t hide from destiny.

We see Vernon and Petunia working really hard to keep up their idea of perfect normalcy. They enroll the kids in school, get their uniforms, and work hard to keep the fact that Harry is a wizard secret from him and the world. Yet, the first letter comes shattering the wall they’ve built between them and the Wizarding World.  When they don’t give it to Harry to read, when they try to hide it from him, the letters keep come. That’s the funny thing about destiny, it always has a way of finding you.

Here in the world of law school it sometimes feels like destiny is this far off mythical concept. We just completed our third week of school: our brains are tired, we are trying to plan for our futures and it feels like the hamster wheel of reading, going to class, studying and joining student organizations is speeding up. We are working hard to try and keep up with classmates because their amounts of studying and reading in the library day in and day out looks like the picture of normal law school we built in our minds before coming here. We join clubs and attend meetings adding more and more to our busy schedules because we want to keep up with everyone around us. Eventually, we will hit the moment of panic in which the Dursley parents found themselves.

You see, our plans never trump destiny. What is destiny? It’s the simple notion of the universe having a predisposed plan for you. In Harry’s case, it was being Voldemort’s enemy and having to save the Wizarding World. What kind of world would have unraveled if Harry never knew he was a wizard? How different would both the Muggle world and the Wizarding world be with Voldemort running rampant?

For most of us 1L students, it won’t be that dramatic, but our destinies will be simply the paths our careers take. Some of us are destined to take high powered jobs and change the world, others will take seemingly less important jobs that will also change the world, and some of us won’t want to change the world.  Now, I’m not saying we’ve got to not push ourselves and work really hard, but I am saying that sometimes our search for perfection, our push to always be better than the day before, our search for normalcy through comparing ourselves constantly to others and trying to keep up with them will drive us mad.

Destiny will always find us and if you meet it with open arms, following your gut instinct down its path, you will do great things in your life. It may not look like we want it to, just think of the differences in the lives of Harry and Dudley (poor, scrawny, seemingly unloved child vs. robust, bratty, overly cherished child), but each of our destinies is simply that, our own.

So really all of this is to say, if you are feeling like you have to keep up with the other 1L students around you, and it’s stressing you out, you have no time for fun or relaxing, take a step back and remember, their destiny (life path) is not your destiny, so stop chasing their path and get back on your own. 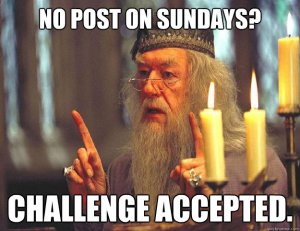